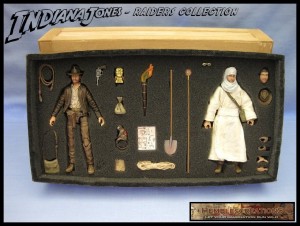 We have 2 really cool Indy contests running at the moment!

The story would be INDIANA JONES and the MAYAN SECRET and the story needs to include Mayans – For example it could do some sort of secret treasure, secret Nazi base, a curse, the fountain of youth or yes even flying saucers.

The photo novel must be 4-5 pages long but can be longer if you want and it can be in any year from 1936-1960 that way Indy is still around so the imagination is the only thing holding you back. There will be only one major prize winner and that winner can pick ANY kind of DX 3-3/4″ Indy they want. Take a look at our IndyCast flickr page to take a look at Ron’s DX Custom figure. These are incredibly detailed versions of the figures with display box and the accessories.

The contest will run till 20th Feb 2014. You can register your interest by emailing me at [email protected]

To win all you need to do is list as many zombie movies as you can. The winner will be the entrant with the most zombie films listed. If we have entries with the same number of films, they will be placed in a fedora and one winner will be randomly selected.

Send your entries in with the subject heading ‘Indy Zombie Contest’ to [email protected]. This contest will be drawn on Episode 178 so get your entries in by Saturday, December 7th, 2014 AEST. Good Luck!

Welcome to the IndyCast, the World’s first weekly Indiana Jones podcast! Each week you can get your Indy fix as host Ed Dolista takes a look at the latest news, interviews, events and opinions from the Indiana Jones fan community. Listen in as we discuss everything from Indiana Jones’ big screen adventures, collectibles, books and beyond!

Indiana Jones and the Temple of Doom